"...the feature finds Johnny escaping from a German prisoner of war camp..." If these Sunday stories from 1964 were published in Swedish publications, can you give me original newspaper dates? I think that here two stories were edited together. I can spot the numbers 682, 710 and 711 - which I assume are the numbers used internally to number the sundays - as well as a "Copyright King Features Syndicate 1964", that should make it easier to find the stories.

Edit. There's an index here listing original publication dates and basic storyline:
http://www.ipcomics.org/#!untitled/cmj0
I hate pop. And skiffle. I tell ya, this is going to be the best jazz decade ever.
Upp

Wakuran skrev:I can spot the numbers 682, 710 and 711 - which I assume are the numbers used internally to number the sundays - as well as a "Copyright King Features Syndicate 1964", that should make it easier to find the stories.

No, 682, 710, and 711 are numbers of issues of old Yugoslavian magazine "Politikin Zabavnik". These stories are:

But I would like if you can compare them with Swedish publications, does it in 711 really started S 058? It seems that two stories were edited together.
Upp

It is difficult to find original (unedited) Sunday pages from newspapers and magazines.

On the internet there are at least two sites where one can read old American newspapers. If somebody can name an American paper which published Johnny Hazard in 1964, I can try to check these Sunday pages.

An other alternative: do these guys know about Hazard's Sunday pages? Is it possible to read strips there? http://comicskingdom.com/johnny-hazard-sundays
Upp

After a small search I found one American newspaper, which published Johnny Hazard Sundays in the 1960’s: Lowell Sun in Massachusetts (btw, Hazard dailies were much more common in newspapers).

Politikin Zabavnik published a half version of the Sunday strip. Its strips 710 and 711 have been taken from the original strip 1964-07-26, which can be read in Lowell Sun here.

And here is the last strip of the previous story ”Sentimental Journey”. It reads in the end: ”Next week: Fatal Lure!”.
Upp

I've checked in that archive also the end of that story and it is completed in Politikin Zabavnik 741.
It's good what is that checked and corrected now.
Upp

It was indeed a little bit confusing that the new story started in 1964-07-26 so that in the beginning there was a reference to the previous story. That is pretty common, though.

If you guys can’t read papers in that archives site but don’t want to register there, you can go to its papers one by one through googling the site name and those newspaper titles and dates which you wish.
Upp 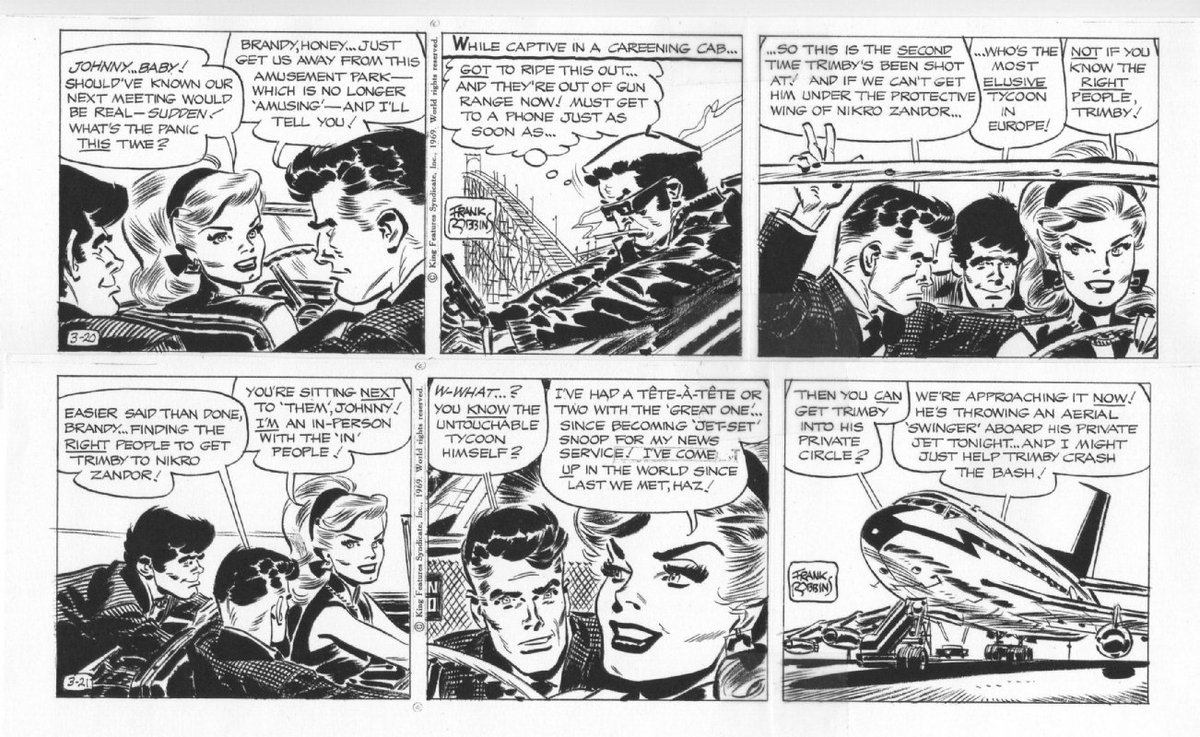 Återgå till "Serier i allmänhet"